You are here: Home › Blog › The Evolution of the Coupon Barcode
January 28, 2016 in Standards

Companies utilize coupons to expand their business by encouraging spending while sparking the interest of saving.  Coupons have been prevalent in society since the late 1800s, with Coca-Cola creating paper tickets redeemable for a free glass of their beverage. Building off the creation of the UPC barcode in 1974 companies made use of the new technology to market themselves to consumers with a more targeted coupon.  As UPC identification and GS1 standards expanded over the years, coupon barcodes have undergone further changes to address new and unforeseen needs. The information below chronicles the evolution of the coupon.

The UPC Coupon Code was created to complement the UPC barcode on products.  The numbers that comprise a UPC are a Company Prefix, Product Number and Check Digit.  When UPCs were first introduced the Company Prefix was a fixed 6-digit number called a UCC Company Prefix. When originally created, the first digit of the UCC Company Prefix, known as a Number System Character, was always a “0” for UPC product barcodes.  The next 5-digits of the prefix uniquely represented a company. Following the prefix was a Product Number,a unique 5-digit number assigned by the manufacturer, and a Check Digit,  a number calculated from the previous 11 digits.

UPC coupon codes always have the Number System Character “5” signaling to the POS system that it is a coupon. The “5” is followed by a version of the Company Prefix in digits 2 through 6 to identify the manufacturer, and to check against the code on the couponed product. The family code comes next which is set by the manufacturer to identify specific products. Following that is the two digit value code designating the value of the coupon from a set list of offer values. The final digit in the UPC is the check digit that is calculated from the previous digits in the code. 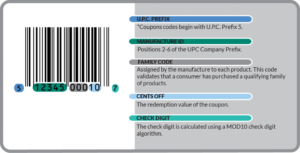 While this system seemed to be an effective way to administer coupons it also created its own conflicts. Primarily with confusion brought on by similarities in company prefixes. Companies would receive a unique 6-digit UCC Company Prefix, that had a “0” at the beginning as their Number System Character to recognize it as a UPC.

As mentioned previously if a company wanted to create coupons they would make their Number System Character a “5” instead of a “0”. The issues begin when the numbers started running out, and to fix this for new companies the UCC began issuing UCC Company Prefixes which started with  Number System Characters from “6” to expand the range of available prefixes. The outcome resulted in confusion when creating coupons. For example: Company A has the company prefix 012345, and Company B has the company prefix 612345. If a coupon is scanned at the POS system with prefix 512345 there is no way to determine which company issued the coupon. Today, company prefixes can begin with a “0”,”6”,”7”,”3”, or “8”. 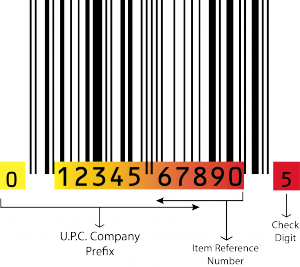 The secondary conflict arising from the UPC was that  no expiration date could be encoded in the coupon. This was a financial concern for any company using coupons because coupons are essentially  an I.O.U from the manufacturers to the retailers. A coupon remaining in circulation beyond its desired expiration date causes a liability for the company involved, as they are only prepared to pay for an offer for a set amount of time.

In 1997, the UCC (now GS1 US) developed a solution to resolve the above shortcomings. The new coupon format revision now contained a UPC coupon with an extended UCC-128 barcode, also referred to as a UCC/EAN-128, now officially called a GS1-128. The extended code was able to have a company’s entire prefix including the Number System Character to eliminate the error of mixing up companies. A 5-digit offer code provided by the manufacturer was included as well to keep track of their coupons in circulation. The GS1-128 also includes an expiration date at the end of the coupon code to ensure that it could not be redeemed after its set date. Just as the entire Consumer Product Goods (CPG) industry was fully implementing the GS1-128 Extended Coupon Barcode, new shortcomings were soon identified.  Due to the continued growth of UPC identification, GS1 began assigning variable length company prefixes ranging from 6-10 digits.  This is the current practice andallows a small company, who only needs a few UPCs, to obtain a 10-digit prefix and create 10 UPCs.  The problem was that companies with  7-10 digit prefixes could not use the GS1-128 Extended Coupon Code. Recognizing that a more robust solution would be necessary the Joint Industry Coupon Committee (JICC) identified other elements of the new coupon barcode which could be improved.  As the popularity of coupons soared, so did the complexity of the promotions.  Ad agencies and manufacturers wanted to offer paired promotions involving 2 or more mandatory purchases.  For example, a consumer could receive a free 12 pack of Coca-Cola if they bought a package of Brand X hot dogs and a bag of Brand y hot dog buns.. An offer like this would not have existed for older coupon format and the cashier would have had to manually code in “checkout intervention” at the time of sale.  Additionally, the legacy coupon values table could only encode 100 possible save values – any variance from this would require additional “checkout intervention”.

In January 2008, GS1 US initiated the transition to GS1 Databar for coupon barcodes.  The GS1 Databar barcode is derived from the Databar language for use in GS1 system applications. There are multiple varieties of GS1 Databar and the GS1 Databar Expanded Stacked format satisfied many of the requirements to encode expanded coupon data.  The GS1 Databar Expanded Stacked barcode can encode up to a maximum of 74 characters, utilize GS1 Application Identifiers, and be scanned omnidirectionally at retail point-of-sale. Unlike the preceding coupon barcodes, a Databar can vary in size to allow less restriction on the amount of information that can be encoded.  Recognizing the enormous impact on both manufacturers and retailers, GS1 US and the JICC established an implementation timeline including the use of an interim format, which contained the UPC Coupon Code. Today, most retailers should be able to read only the GS1 Databar Coupon format without the UPC component. 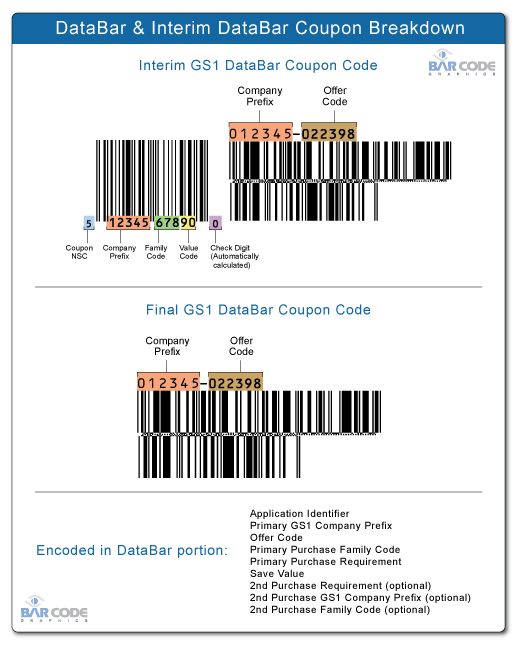 One of the other realized benefits was a defense maneuver against coupon counterfeiting. The new format does not display in the human readable section all of the encoded coupon data.  As illustratrated above, the only data displayed is the GS1 Company Prefix and Offer Code.  The GS1 Databar Coupon format has enhanced what the original coupon code symbology once was by creating the ability to code with custom values, better product identification support, tracking, and overall quality control. Brands We Work With